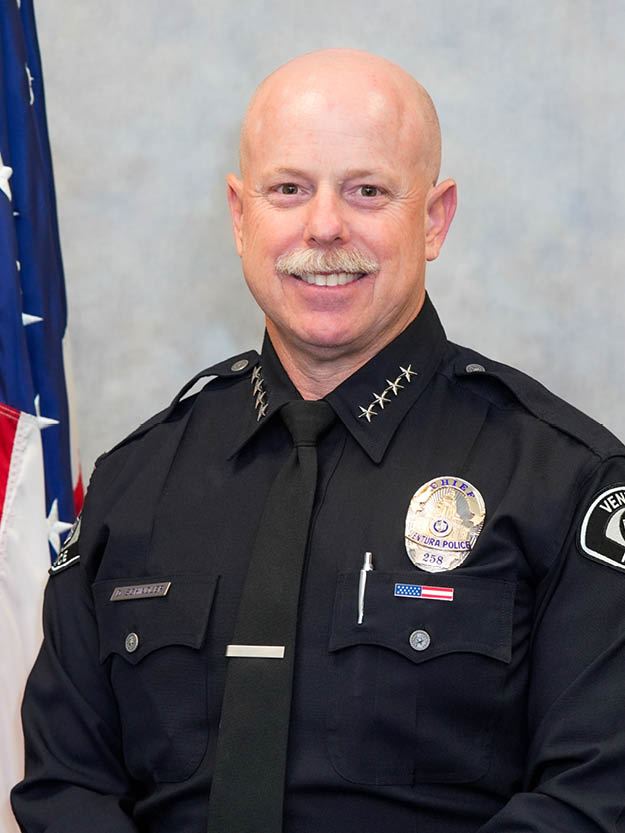 Chief Darin Schindler was born and raised in Ventura County and has called the City of Ventura, and the Ventura Police Department, home for the past 27 years. He began his career with the Port Hueneme Police Department as a Reserve Police Officer in 1989 and was hired as a full-time police officer in 1990. He joined the Ventura Police Department in 1995 where he has held every rank from Police Officer through Assistant Police Chief. Darin’s 32 years of policing experience span assignments as a Patrol Officer, Field Training Officer, Community Policing Beat Corporal, Major Crimes and Narcotics Investigator, Sergeant in Patrol, Traffic and Professional Standards, Investigations Commander, and Assistant Chief overseeing all police operations.

"The Ventura Police Department and its employees, professional staff and sworn alike, are committed to being responsive to community concerns, reducing crime, and maintaining safe neighborhoods for all residents," said Chief Schindler. "I am grateful for the opportunity to continue developing relationships with our Ventura residents, business owners, and local students while working with our community to problem solve and enhance the quality of life in our city." 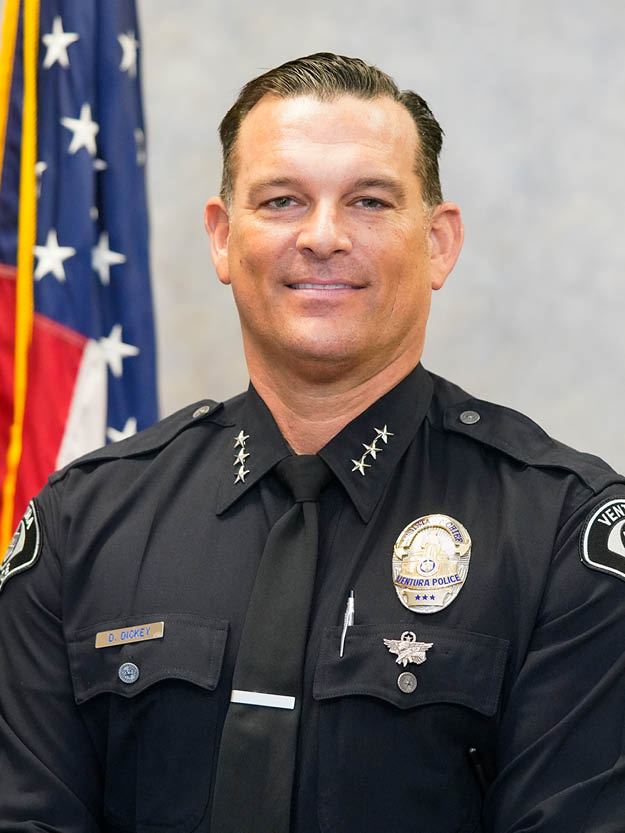 Assistant Chief David Dickey grew up in Ventura County, where he spent much of his childhood in the City of Ventura and around the Channel Islands. He has served with the Ventura Police Department since 1997.

David has an Associate’s degree in Administrative Justice, a Bachelor’s degree in Criminology, a Masters in Law Enforcement and Public Safety Leadership from the University of San Diego, and holds a Leadership Pathways Certificate from the Drucker School of Business. He is a graduate of the Sherman Block Supervisory Leadership Institute and the California Police Chiefs Executive Leadership Institute at Claremont Graduate School. He is also a POST Command College graduate, where he received the Futures Portfolio Project Award.

David has received the Medal of Valor from the Peace Officer Association of Ventura County for two separate incidents. He has been the recipient of three VPD “Right Stuff” awards for various bravery acts and has received two VPD “Supervisor of the Year” awards. 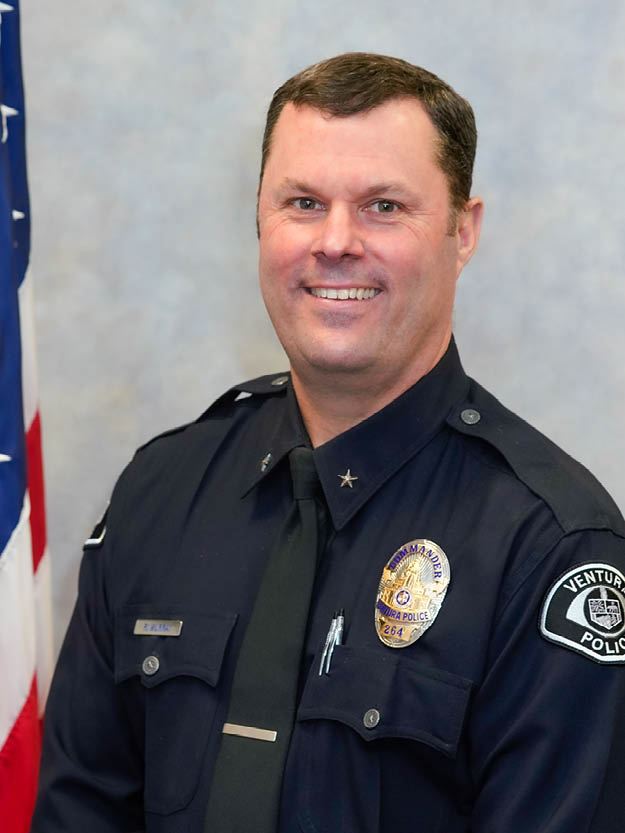 Commander Rick Murray currently oversees Investigations which includes: Major Crimes, Special Victims Unit, Property Crimes, Narcotics, Gangs, School Resource Officers, Crime Analysis, and CSI. He is also the Commander responsible for our Honor Guard. Rick began his law enforcement career with the Los Angeles Police Department and joined the Ventura Police Department in 1996. He was promoted to Corporal in December of 2002, to Sergeant in April of 2005, and Commander in December of 2012.

Rick has an Associates degree in Administration of Justice, a Bachelors degree in Criminology from the University of La Verne, and a Masters degree in Forensic Science from National University. Rick is a graduate of the POST Sherman Block Supervisory Leadership Institute, California’s POST Command College, and California Police Chiefs Executive Leadership Institute at Claremont Graduate School. He has taught at the Ventura County Criminal Justice Training Center in Force Options as well as Emergency Vehicle Operations. In 2011 Rick was selected as the department’s Supervisor of the Year. 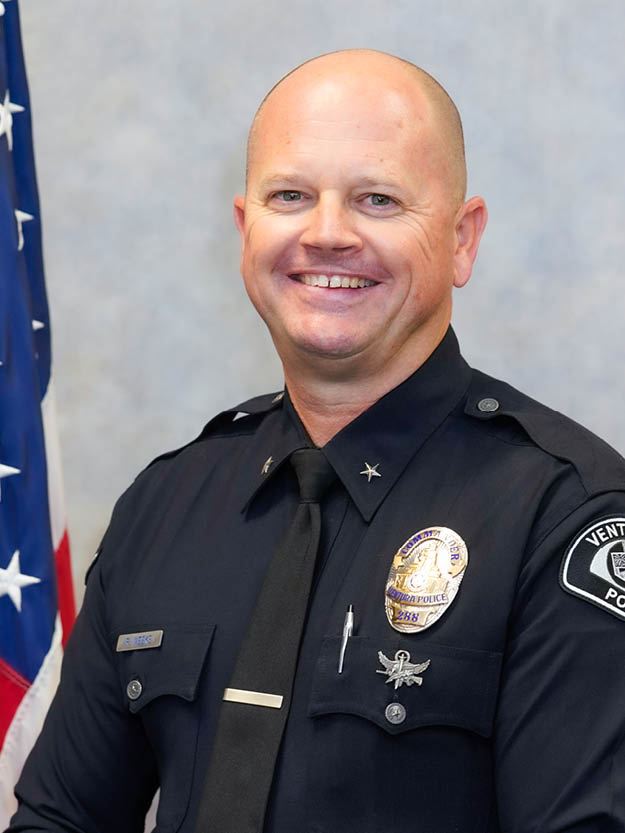 Commander Ryan Weeks is currently assigned as a Watch Commander who also oversees the Communications Center, the Field Training Program, and the SWAT Team. 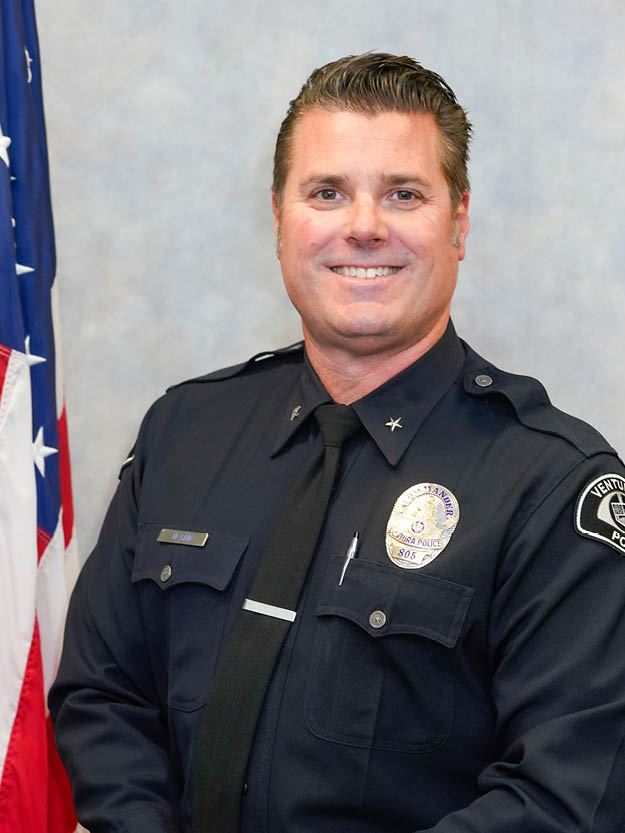 He was promoted to Corporal in 2006, Sergeant in 2012, and to Commander in July 2020. He’s previously supervised the Major Crimes Unit, the SWAT team, and the Crisis Negotiations Team. He’s served in various specialty assignments including Motors, Street Crimes, and Major Crimes and is currently a certified POST EVOC (Emergency Vehicle Operations Course) Instructor and a Force Options Simulator Instructor.

Matt was awarded the LAPD Meritorious Service Medal in 1997 and the VPD Medal of Merit in 2007. He was the City of Ventura’s Supervisor of the Year in 2015 and 2019. He is a Sherman Block Supervisory Leadership Institute graduate and holds a Bachelor’s degree in Criminal Justice from California Coast University. 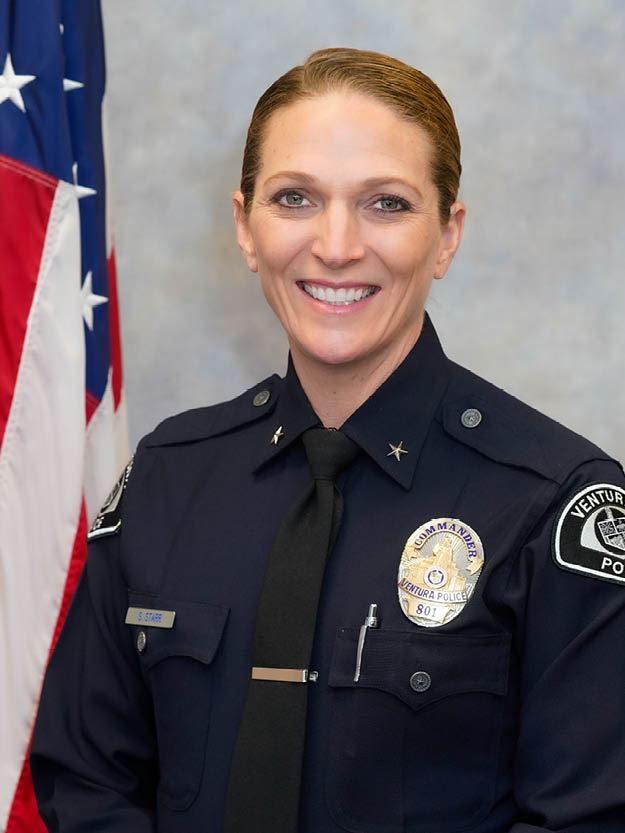 Sarah began her law enforcement career with the Ventura Police Department when she graduated from the Academy in July of 2003. She promoted to Corporal in 2007, Sergeant in 2014, and to Commander in July 2020. Most recently, she served as one of our Watch Commanders.

She’s served in Major Crimes for five years, as a Negotiator on the Crisis Negotiations Team for 10 years, as an Academy Instructor, and as a Scenario Based Training Instructor.

She is a graduate of the Sherman Block Leadership Institute. She holds a Bachelor’s degree in Psychology from UC Davis and a Master’s in Public Administration from Cal State Northridge. 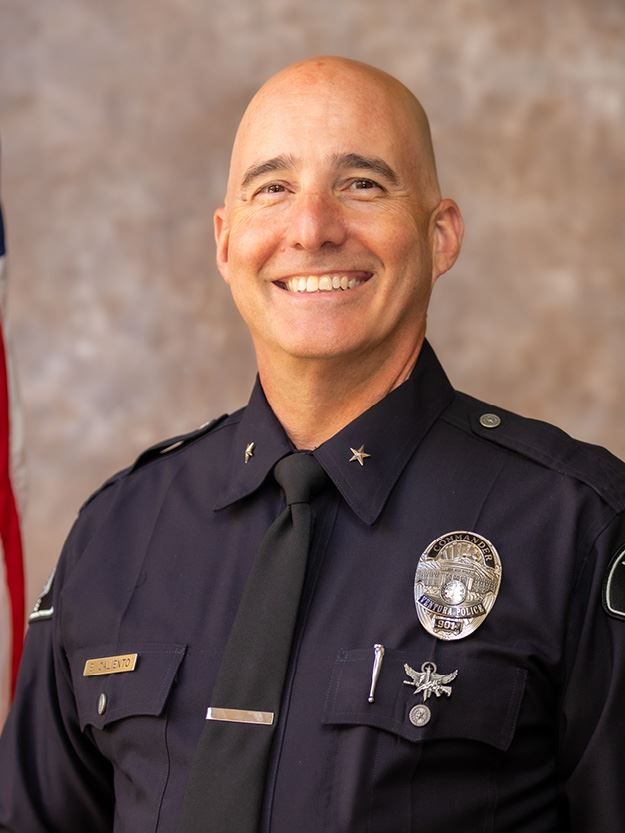 Edward began his career with the Ventura Police Department in 2006. He was promoted to Corporal in May 2015, Sergeant in December 2016, and Commander in May 2022. He was a Major Crimes Detective, a Negotiator on the Crisis Negotiations Team, an Academy Instructor, and a member of the Peer Support Team. Prior to being promoted, he served as a Detective Sergeant of the Street Crimes Unit, and the Team Leader of the Crisis Negotiation Team.

Edward served in the United States Marine Corps. He has a bachelor’s degree in history from Southern Illinois University and is currently enrolled in a master’s program at the University of San Diego in Law Enforcement and Public Safety Leadership. Edward is a graduate of the Sherman Block Supervisory Leadership Institute. He was awarded the VPD Supervisor of the Year in 2021 and nominated as the City of Ventura Supervisor of the Year in 2019 and 2021. 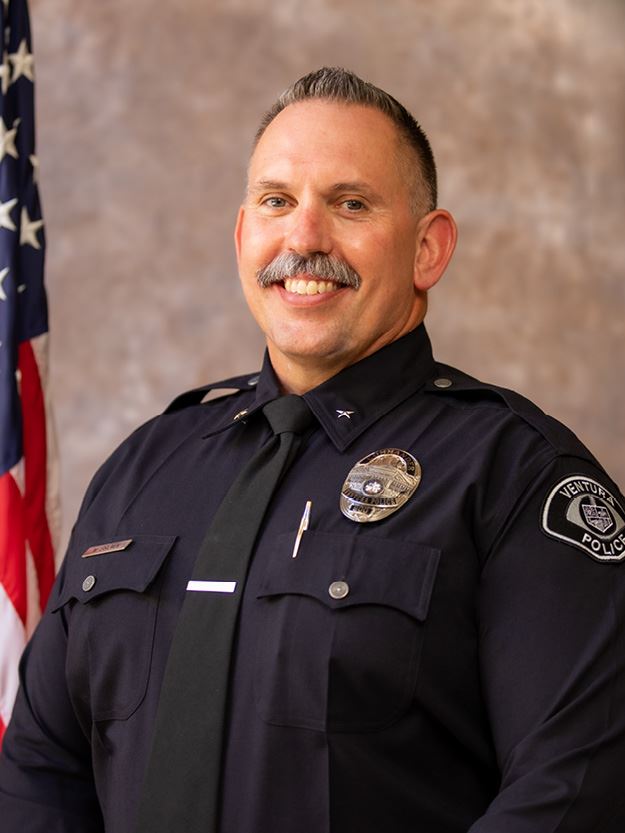 Commander Mike Brown is currently assigned as a Watch Commander. He also oversees Department fleet and the armory.

Mike began his career with the Ventura Police Department in 2000. He was promoted to Corporal in 2012, Sergeant in 2016, and Commander in August 2022. He's served on the SWAT team for 13 years as a Scout Back-up, Scout, and Team Leader, and has worked as a Gang Prevention detective, Arrest Control Instructor, and a Corporal in our Dispatch Center. Finally, he is the only sworn employee to have held every rank in our Traffic Unit.

Mike served in the United States Marine Corps. He has a degree in Organizational Management from the University of La Verne and is a graduate of the Sherman Block Supervisory Leadership Institute. 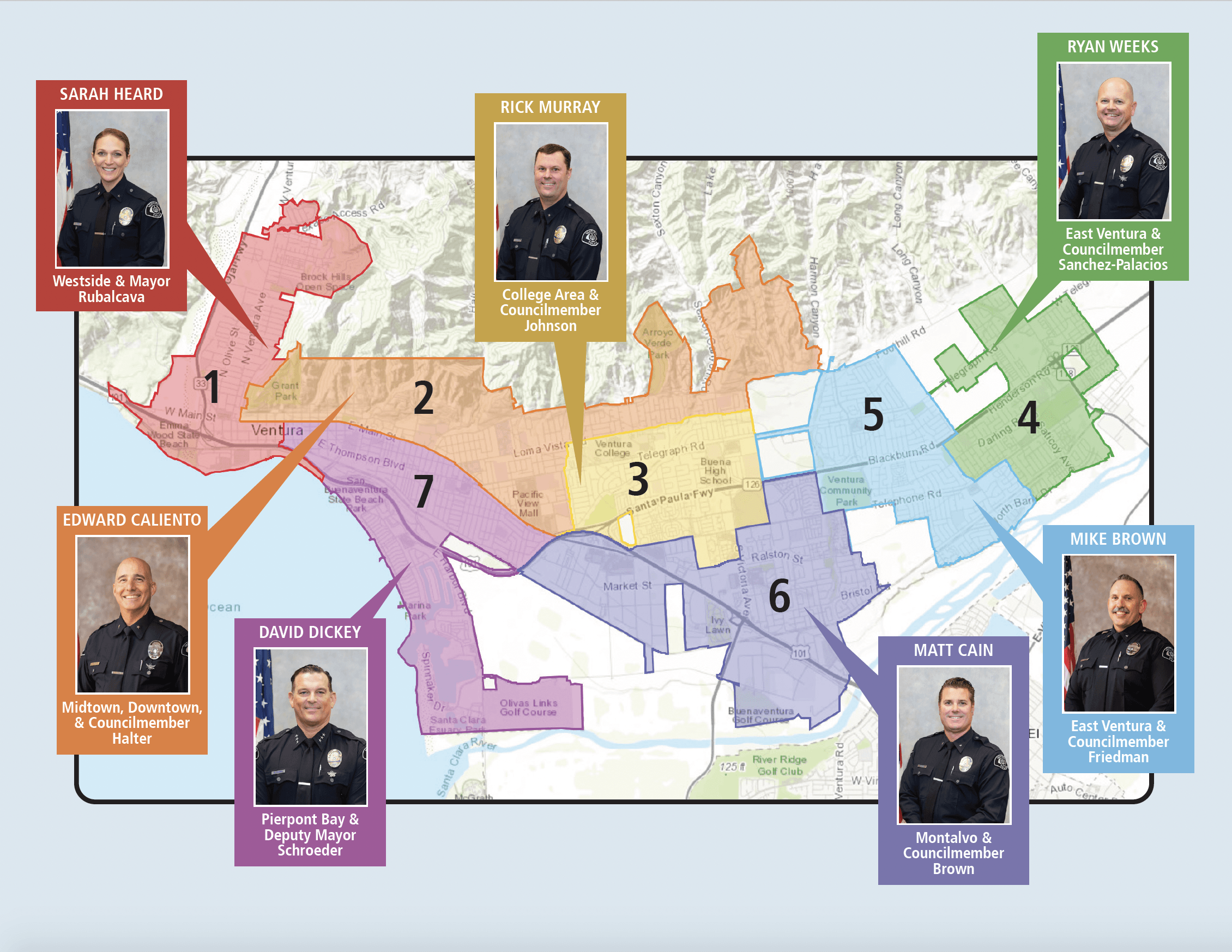