The City of San Buenaventura (Ventura) is a Charter City with a City Council/City manager form of government. Starting in 2018, registered voters elect seven (7) City Councilmembers by Districts. City Councilmembers serve a term of four (4) years with the terms being staggered on a 2-year basis with three (3) members being elected at one election and four (4) at the next. The Mayor is elected among its members and serves a two (2) year term.

Read our Election Calendar for a detailed timeline of the 2022 election process:

As of January 1, 2022, all registered voters will be issued a Vote By Mail Ballot, without having to request it. Ventura County voters are also able to vote in person at any vote center located throughout Ventura County.

No person shall hold or be eligible for nomination to office as a member of the City Council unless at the time their nomination papers are filed or their appointment made, they are a registered voter of this City and they have been continuously, for at least one year next preceding their election or appointment, a resident of this City or of territory annexed thereto (Charter Art. V, Sec. 503)

A Member of the City Council elected to represent a district must reside in that district and be a registered voter in that district, and any candidate for City Council must live in, and be a registered voter in, the district in which he or she seeks election at the time nomination papers are issued, pursuant to Elections Code 10227. Termination of residency in a district by a Member of the City Council shall create an immediate vacancy for that Council district unless a substitute residence within the district is established within 30 days after the termination of residency. [Ordinance 2018-001, Chapter 2.210–San Buenaventura Municipal Code]

Prior to soliciting for any campaign funds OR expending any personal funds for the election, individuals must file FPPC Form 501 (Candidate Intention Statement) with the City Clerk. 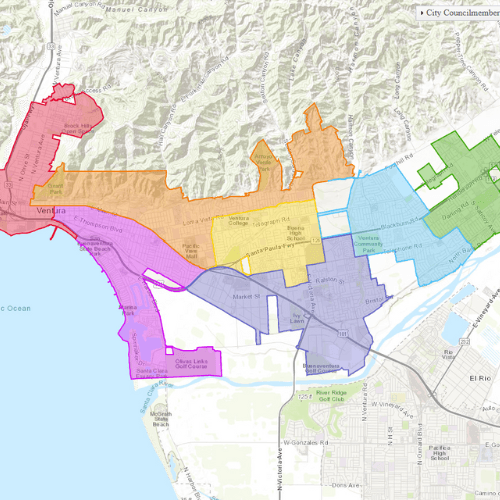