This project is a continuation of the initial phase of the Surfer's Point Managed Retreat Project, which was completed in 2013. The project’s first phase was extremely successful, garnering national attention for its adept approach to addressing long-term coastal resilience.

The project aims to meet the City’s coastal resilience goals through a multi-faceted approach. During the second phase of the project, the City will remove existing infrastructure along the coastline that has been damaged due to consistent wave action and erosion, and reconstruct the coastline with dunes, native plantings, and a buried cobble berm that will provide long-term protection to City and Fairgrounds infrastructure.

The project will also include the construction of a new multi-use path and parking lot with an attendant station, a public art component, new lighting, drainage improvements, landscaping, and electrical vehicle parking, all of which will be protected by the reconstructed dunes, plantings, and buried cobble berm. 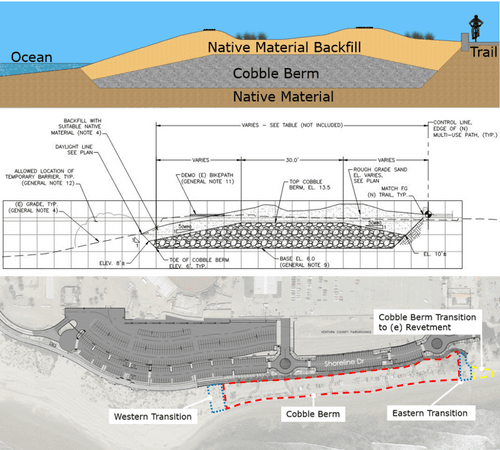 Surfer's Point is a major recreational site for swimming, surfing, windsurfing, and kayaking. The project will create safer conditions for residents and visitors and will protect this stretch of shoreline from damage due to wave action and further erosion. The City is currently actively pursuing grant funding for the construction of the second phase of this iconic project.