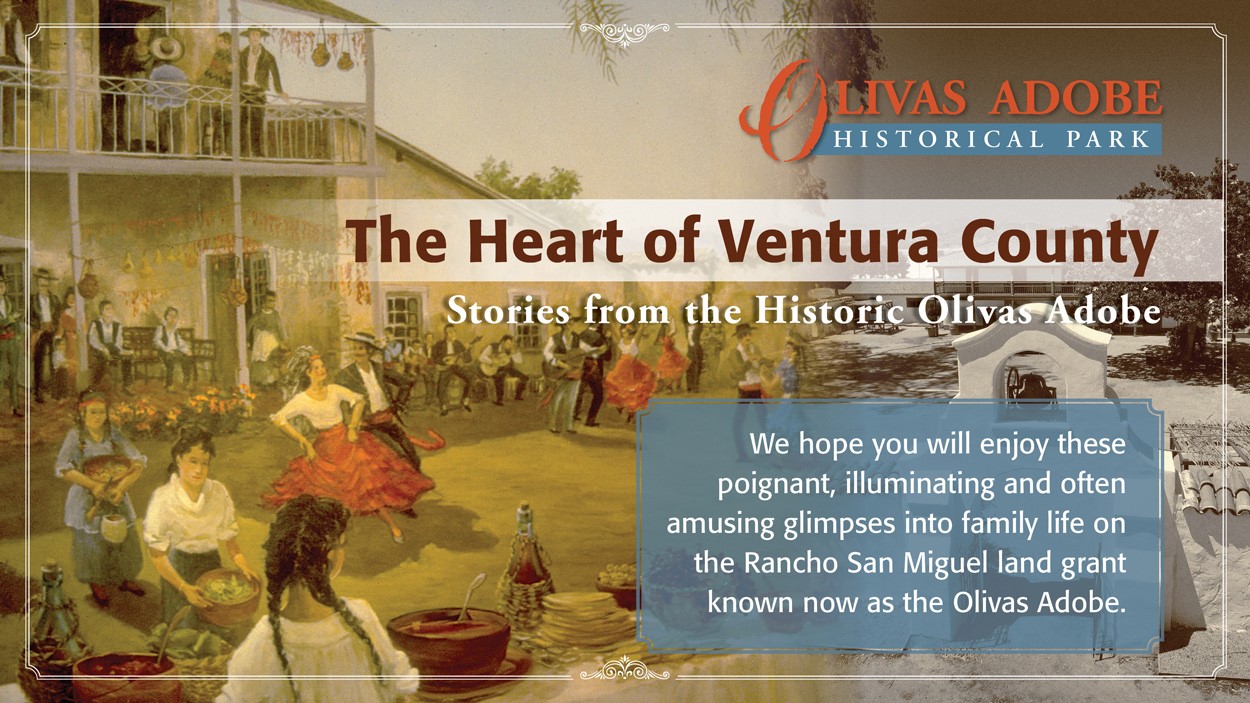 The Heart of Ventura County - Stories from the Historic Olivas Adobe

The Parks & Recreation Department, Olivas Adobe Historic Interpreters (OAHI), and CAPS Media are excited to share a series of short video stories that help bring the historic Olivas Adobe to life. We hope you enjoy these poignant, illuminating, and often amusing glimpses into life on the Rancho San Miguel land grant, known today as the Olivas Adobe.

In 1847, Don Raymundo began building his adobe home at Rancho San Miguel. The adobe home was one of the few two-story haciendas in Southern California and one of the most impressive homes in the Santa Clara River Valley.

Don Raymundo raised cattle, sheep, horses, oxen, and dairy cows. He traded hides and tallow to the trading ships anchored in the harbor. During the gold rush, Don Raymundo decided to drive his cattle North to sell as meat for the miners. This made the Olivas family wealthy. They were granted the titles of Don and Doña. Servants were hired, and fiestas became common at their hacienda. Family legend says that on each child's fifth birthday, the child received a horse as a present.

Richard Senate shares a story that defines the look of the Olivas Adobe site.

Local historian Richard Senate has written many books about Ventura County and its colorful history. The Great Robbery is one of Richard's favorite stories, as it sheds light on the reason Don Raymundo had the wall surrounding his adobe home and courtyard built.

Jose de la Trinidad Olivas was born in San Fernando in 1842 and was the 8th son of Don Raymundo and Doña Theodora. Jose married Ampara Espinoza at the Santa Barbara Presidio and together they had seven children. Jose worked on a ranch in Carpinteria where Jose and Ampara's first two children were born. Later, Ampara lived at Rancho San Miguel and was known for her elaborate embroidery. An accomplished seamstress, Ampara made many of the wedding dresses for the Olivas daughters. Ampara belonged to the Altar Guild at Mission San Buenaventura doing fine needlework for the altar cloths.

Pancha Dreams of Life Beyond the Rancho.

Francesca Olivas Suytar, who’s nickname was Pancha, was the 14th child of Don Raymundo and Doña Teodora Olivas. Pancha often told her family that one of her life's biggest thrills was dancing with the Governor of California at a ball. Pancha married Bill Suytar in 1889, and together they had three sons. Pancha never learned to speak English. It was rumored that anyone who called her on the telephone and spoke in English had the phone hung up on them. Pancha is buried at Ivy Lawn Cemetery which was once part of the Olivas land grant.

Story #5 Goodness from the Garden

Docent Bob Sandler shares Olivas family secrets from the garden he cares for.

This beautiful herb garden represents the plants used by the Olivas family in the late 1800s. The planting of aromatic herbs and other greenery together is a centuries old tradition that the Olivas family followed. Their garden was not only beautiful but filled with valuable cooking spices and medicinal plants.

Rebecca shares the history that still lives on at the Rancho.

Rebecca Olivas de la Riva, born in 1858, was the 21st and last child of Don Raymundo and Doña Theodora. Rebecca was a talented musician who played the guitar, accordion, and piano. She married William (Guillermo) de la Riva, the brother of her older sister's husband. William was a farmer and together they had six children.

After her father's death, Rebecca lived in the adobe home at Rancho San Miguel with her family. She took care of her mother and planted the famous Shuller fuchsia that still grows at the site today. Rebecca was the last Olivas to live in the adobe home.

Ray Yanez, born in 1914, was the son of Rebecca and Josef Yanez, and the great grandson of Jose de los Santos Olivas. Known as “Cowboy,” Ray was a professional cowboy with movie credits in cowboy films, rodeo trophies, and enjoyed teaching horsemanship classes. He married Marie Blevins and they had three children.

Story #8 From Rancho to Ritz

After passing through several hands, the Adobe was purchased by yeast king Major “Max” Fleischmann, who restored the building in 1927 and built the distinctive bell archway. After Fleischmann’s death, the Adobe was donated to the City of Ventura. It opened as a museum in July of 1974.

Join us next Thursday for the latest video story in our 9-week series about life at Rancho San Miguel!

Story #9 An Olivas Among Us

Hear from an Olivas descendent still volunteers at the Adobe today

Georgia Olivas Madrid was born and raised in Ventura. As a direct descendant of the Olivas family, she enjoys volunteering at the Olivas Adobe, her ancestral home, giving weekend tours along with welcoming visitors to events such as Music Under the Stars, Rancho Days, and the Holiday Candlelight Tour.