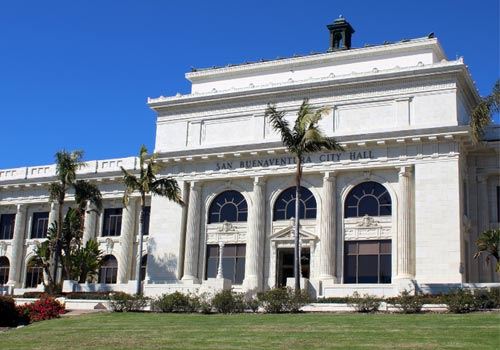 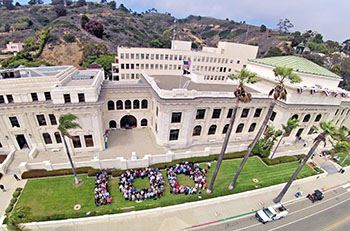 City Hall began life as the Ventura County Courthouse Annex and housed the Sheriff's Office and jail. The original architect, Albert C. Martin is also known for his design of Grauman's (now Mann's) Chinese Theater in Hollywood. The 200-foot frontage by 135 foot depth annex was completed twenty years after the original Ventura County Courthouse. The five-year project (1927-1932) was supervised by architect, Harold Burkett, and built by the Union Engineering Company of Los Angeles. Between the first and second floor windows of City Hall are 24 faces. They depict mendicant priests which served as a historical reminder that the City of San Buenaventura was one of the nine original Mission towns founded by Father Junipero Serra and Franciscan friars in 1782.

In 1969 The Ventura County Courthouse closed its doors when it was determined to be seismically unsound. To save the building from demolition, the City of Ventura purchased it from the County. After three years of planning and two years of restoration, structural reinforcement and replacement of plumbing, electrical and air conditioning systems, the building opened for City business in 1974.

The majority of the site's restoration occurred to the terra cotta exterior in 1987-88 and 2004-5. In 1987-88, Bob Hatch supervised the project using ten trained workers and 16 months of steam cleaning and restoring of City Hall West's 3,600 terra cotta tiles replacing 959 damaged tiles. In 2005, Rainbow Waterproofing & Restoration Co., restored the complex's entire façade, repairing 10,000 blocks by sanding and repainting, replacing 100 damaged blocks and installing a water repellant over the walls and joints. It also included re-reroofing City Hall West and the Atrium.

In May of 1999, the Municipal Art Acquisition program was established by City Council to document the history of visual art in Ventura by featuring and highlighting important works of art created by area artists. The collection provides increased access to artwork of high artistic merit and aesthetic quality through its display in the public areas of City Hall and other municipal buildings. The Municipal Art Collection on the first and second floors of City Hall features 100 works by 70 artists. The collection is open Monday through Friday from 7:30 am to 5 pm. 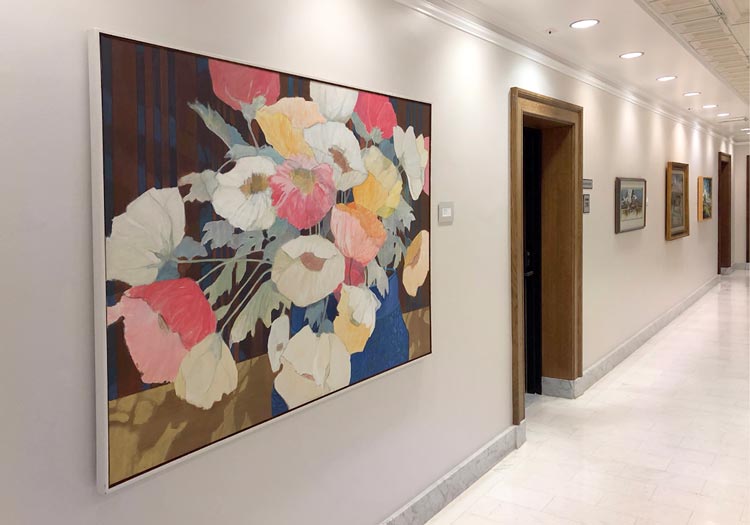