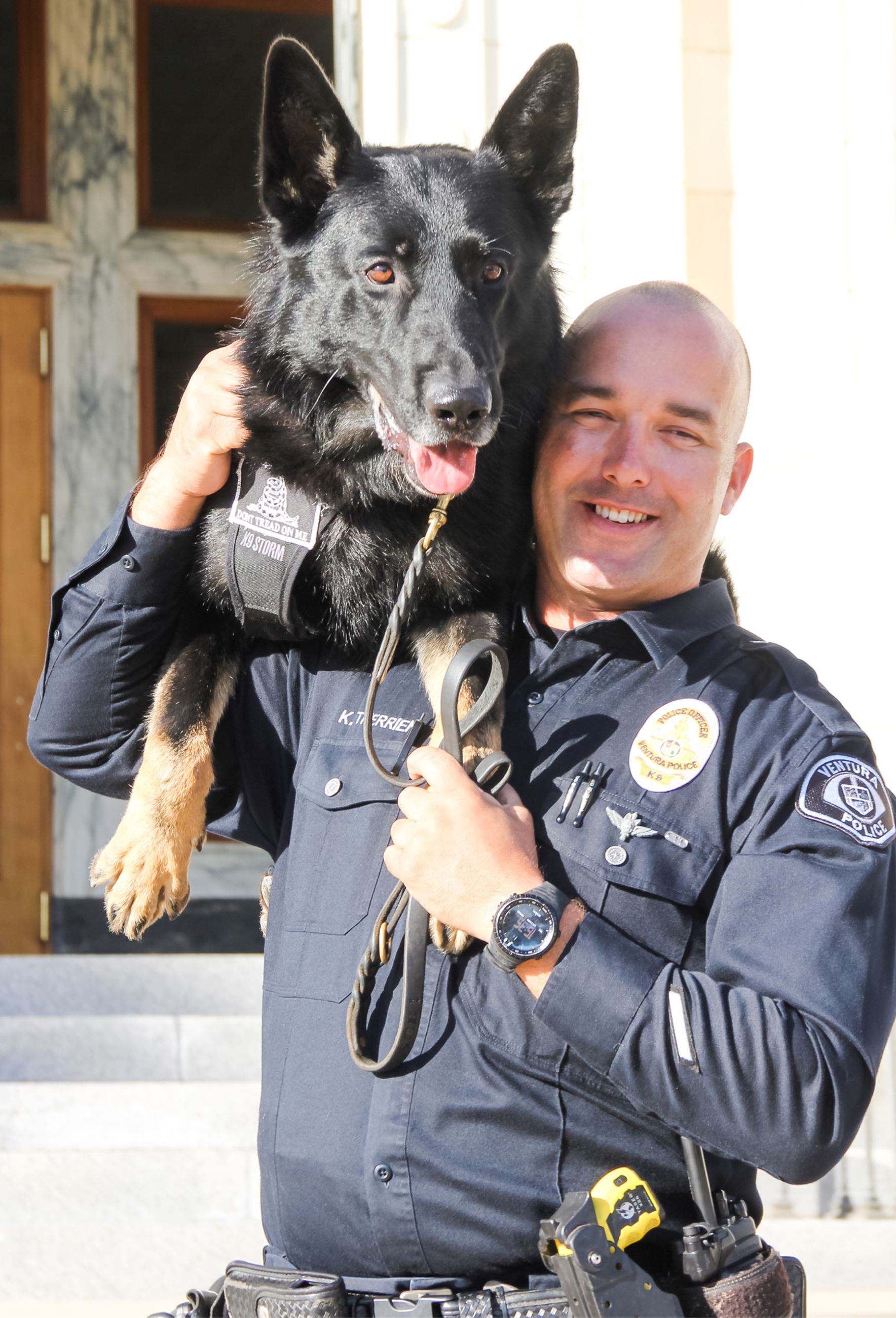 Officer Keith Therrien is partnered with Yoschi Vom Haus Vortkamp, aka Yoschi. Officer Therrien and Yoschi were partnered together in May of 2016 when they attended the Inglis Police Dog Academy. Yoschi was trained in basic obedience, tracking, apprehension and narcotics detection. Yoschi was purchased through donations made by Ventura Baptist Church. Keith and Yoschi have graduated Narcotics School and Urban Tracking School.

Officer Therrien is a veteran of the U.S. Army where he deployed in support of Operation Iraqi Freedom and Operation Enduring Freedom. 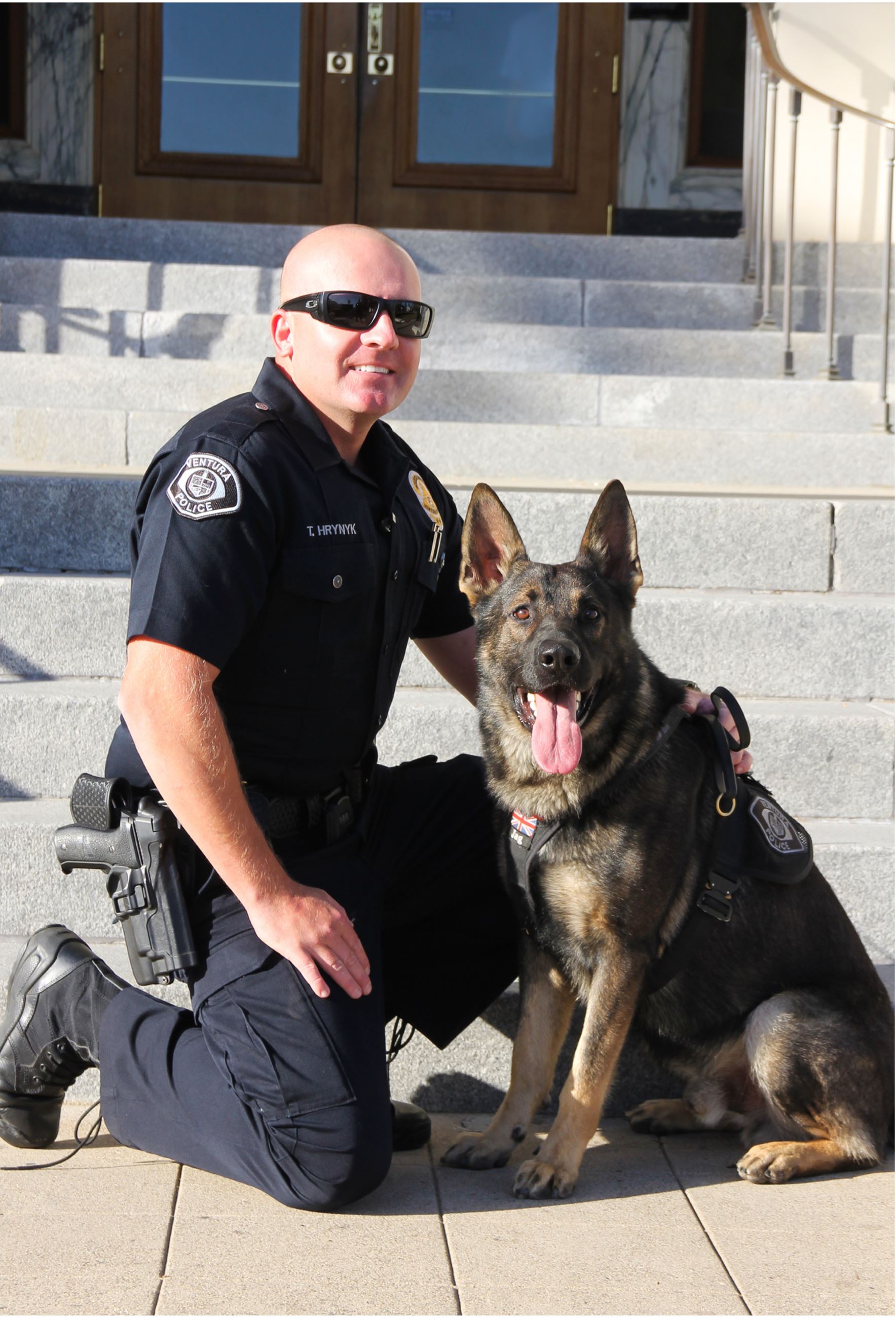 Officer Trevor Hrynyk is paired with Jag, formerly known as Bronko von Schiffilache. Officer Hrynyk and Jag have completed a rigorous 5-week patrol school at the Inglis Police Dog Academy and graduated from Narcotics School and Urban Tracking School. Jag was brought directly from Germany to Ventura at 18-months-old. Jag was purchased through a generous donation from Land Rover Jaguar Ventura.

Officer Hrynyk and Jag, along with the entire K9 Unit, dedicate an entire day each week for dog training. Training includes obedience, apprehension, searching, and location of narcotics. A K9 team spends approximately 30% of their time training. 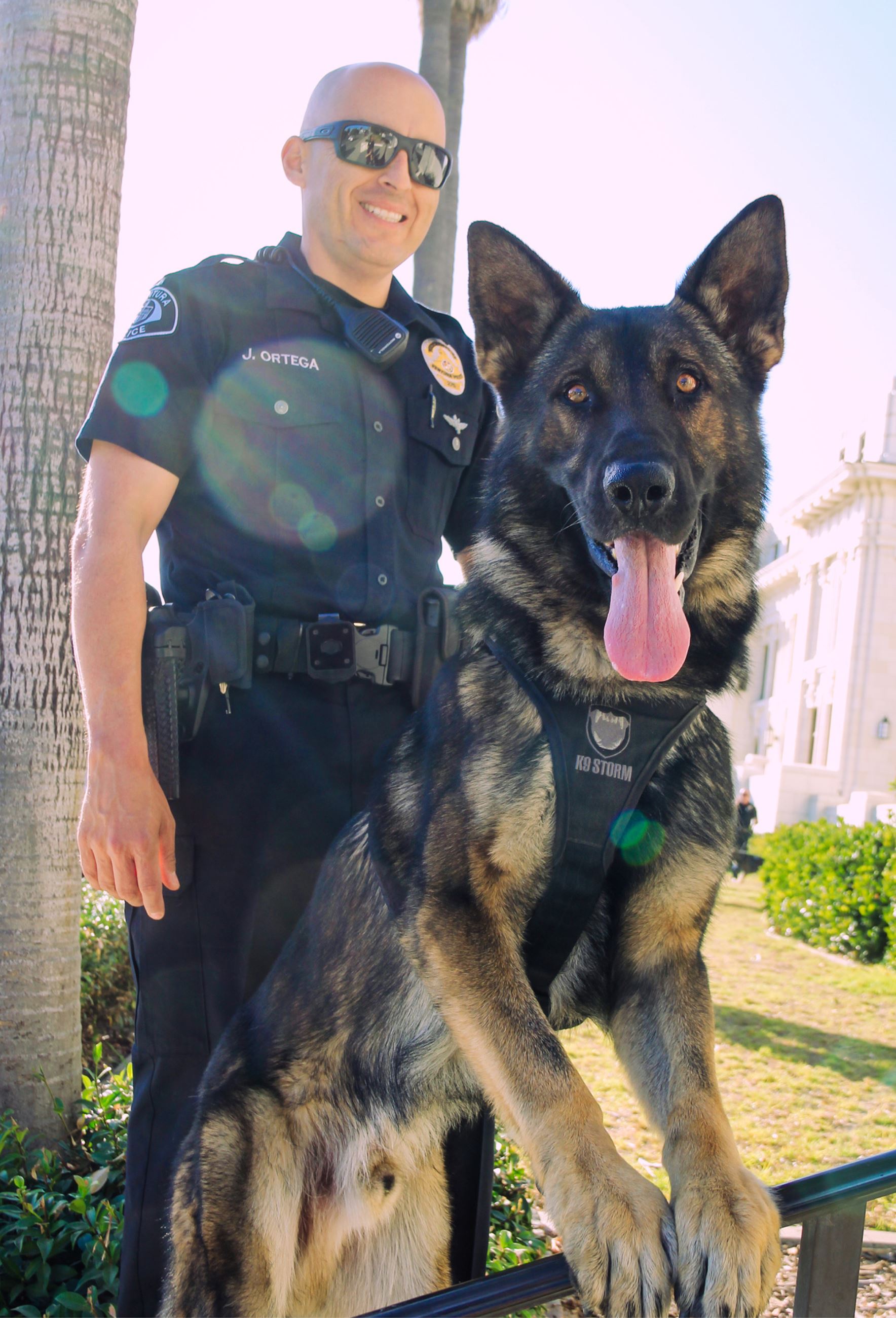 Officer Jack Ortega is partnered with Miles. Officer Ortega and Miles were partnered together in July 2017 when they completed a 5-week patrol school through the Inglis Police Dog Academy. Miles is trained in obedience, tracking, and apprehension. In July 2018, Officer Ortega and Miles attended a 4-week explosives detection course and became VPD's first explosives detection K9 team. Miles was purchased through a generous donation from Josh Spiker of Mile 26 Sports in Ventura.

Officer Ortega has been an officer over 20 years and also a K9 Officer in the past, partnered with K9 Felix and K9 Artus from 2001-2011. In July 2019, Officer Ortega and Miles won first place in ™Explosives Parcel Search∫ at the Bakersfield Police Department K9 Trials. 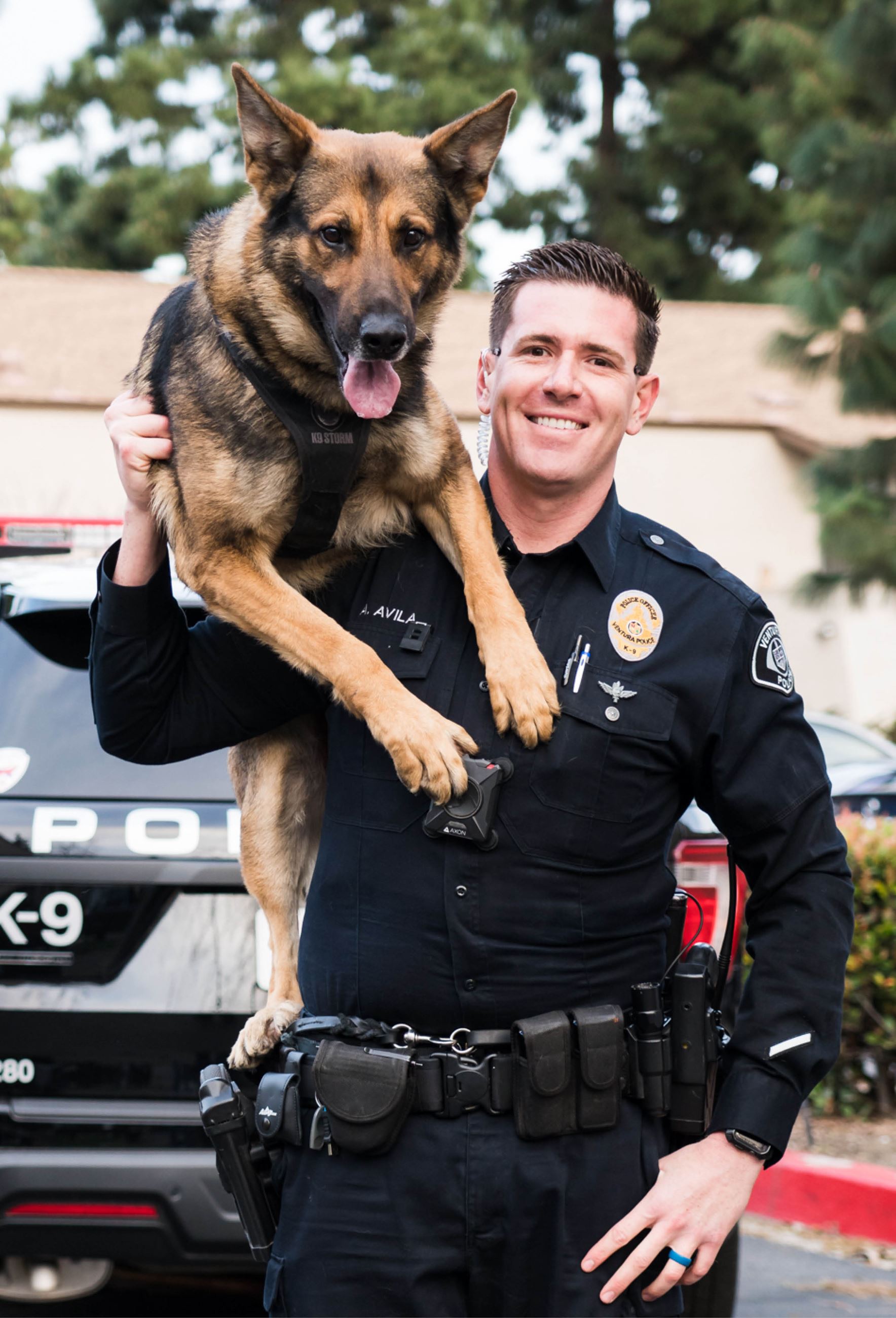 Officer Anthony Avila is partnered with Berkan Vom Haus Vortkamp, aka Bolt. Officer Avila and Bolt were partnered together in July 2017 when they completed a 5-week patrol school through the Inglis Police Dog Academy. Bolt is trained in obedience, tracking, and apprehension. Officer Avila has been a sworn officer since April of 2012.

Bolt was brought to Ventura from Germany at 18-months-old and has been training to be a police dog since he was a puppy. Bolt has assisted officers in apprehending armed and dangerous suspects wanted for attempted murder, armed robbery with a gun, resisting with felony warrants, and felony evading in a stolen vehicle.  Bolt has also been notably successful in narcotics detection, aiding officers and detectives in locating and seizing large amounts of illegal drugs leading to numerous narcotics sales arrests. 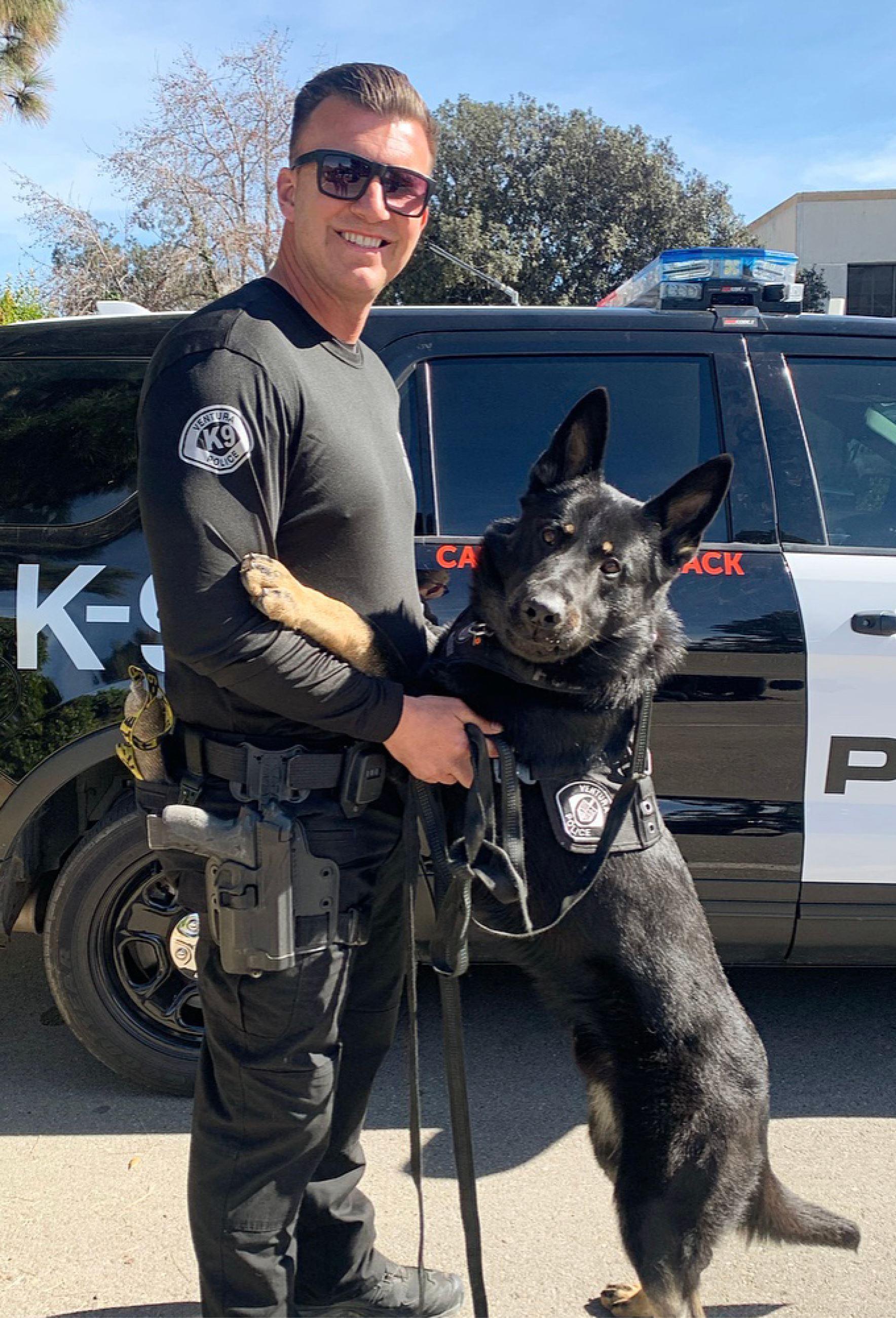 Officer Portillo is partnered with Davos von der Schiffslache, aka Deco. Deco was purchased through a generous donation from Jewelry Couture and named after their in-house brand: DECOage.

In January 2020, Officer Portillo and Deco attended a 5-week patrol school at the Inglis Police Dog Academy. In more recent months, the duo has not only become certified in hard surface and urban tracking but also in explosives detection. This makes Deco the second explosives detection dog our city has ever had. Officer Portillo has been a Ventura Police Officer since 2013. 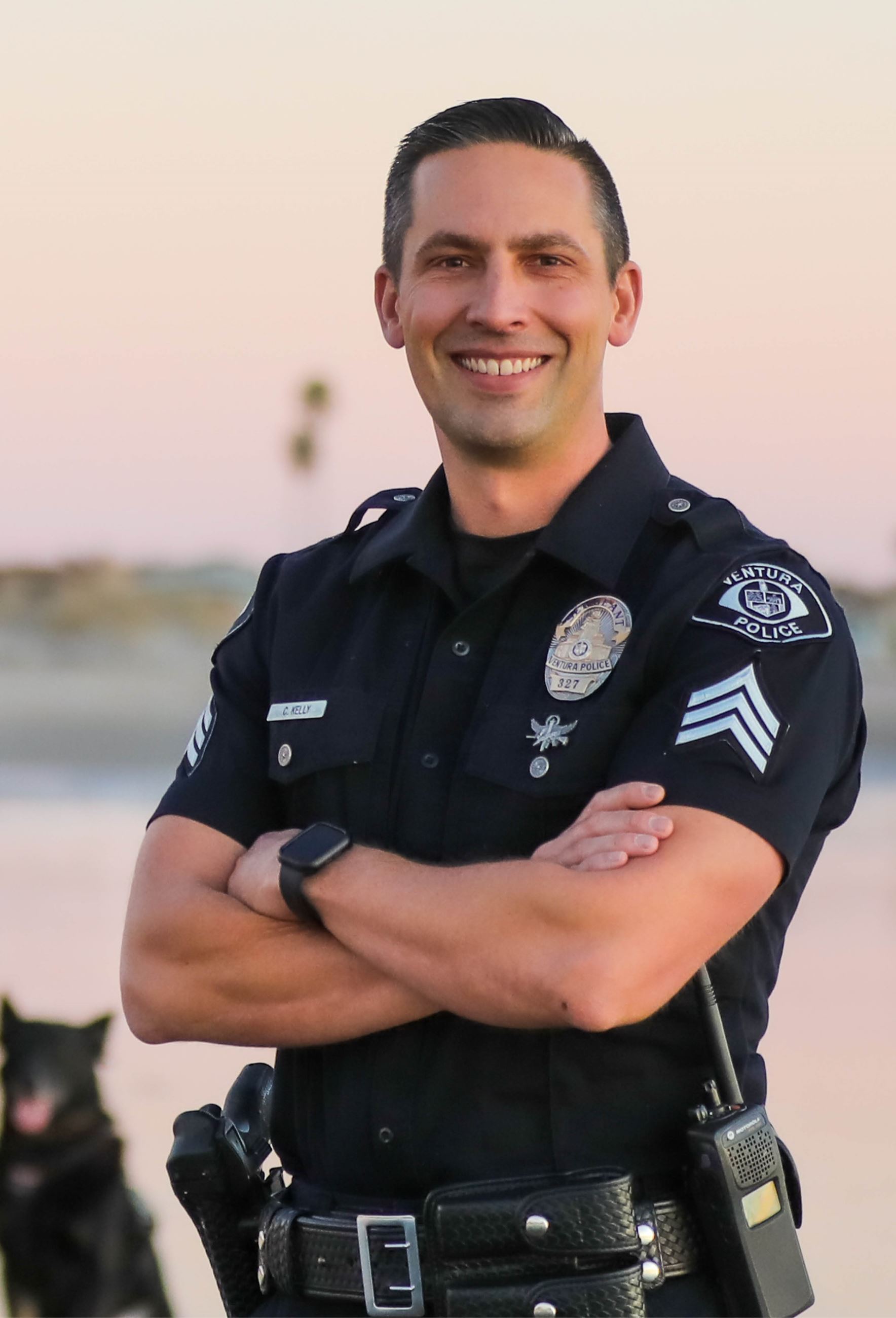 Sergeant Kenny Welch has been with the Ventura Police Department for over 20 years. He has held numerous assignments such as: Patrol Officer, Field Training Officer, Academy Instructor, a Street Crimes Unit Detective, a Patrol Task Force team member, the Communications Center Supervisor, an FTO Supervisor, and a member of the SWAT Team. He is currently assigned to Professional Standards and serves as the K9 Unit Supervisor. 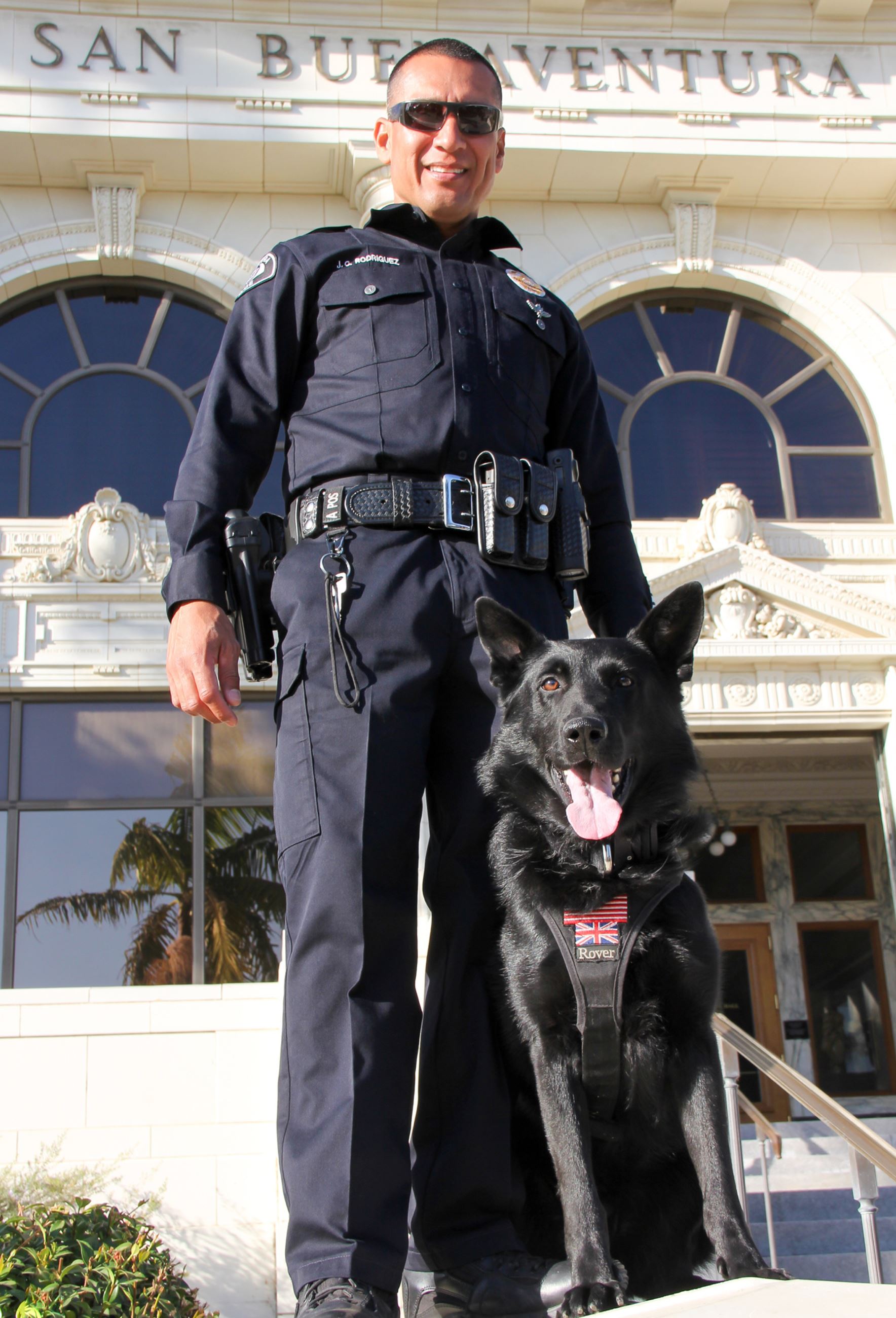 Officer JC Rodriguez and Rover joined the unit in September 2014. Rover was born on August 4, 2012 in Germany as Enjo vom Cap Arkona and was purchased with a generous donation from Land Rover Jaguar Ventura. Officer Rodriguez and Rover went through Narcotics and Urban Tracking School at the Inglis Police Dog Academy and were most recently awarded third place in "Protection" at the Bakersfield Police Department K9 Trials in 2019.

Officer Rodriguez has been a sworn police officer since 1995 and began work with VPD in August of 2011. He has had the opportunity to work with Motors, Detectives, the Gang Task Force, Narcotics on a DEA Task Force, and SWAT.

Rover retired September 2, 2019 due to health concerns and is enjoying time at home playing and relaxing with his family. 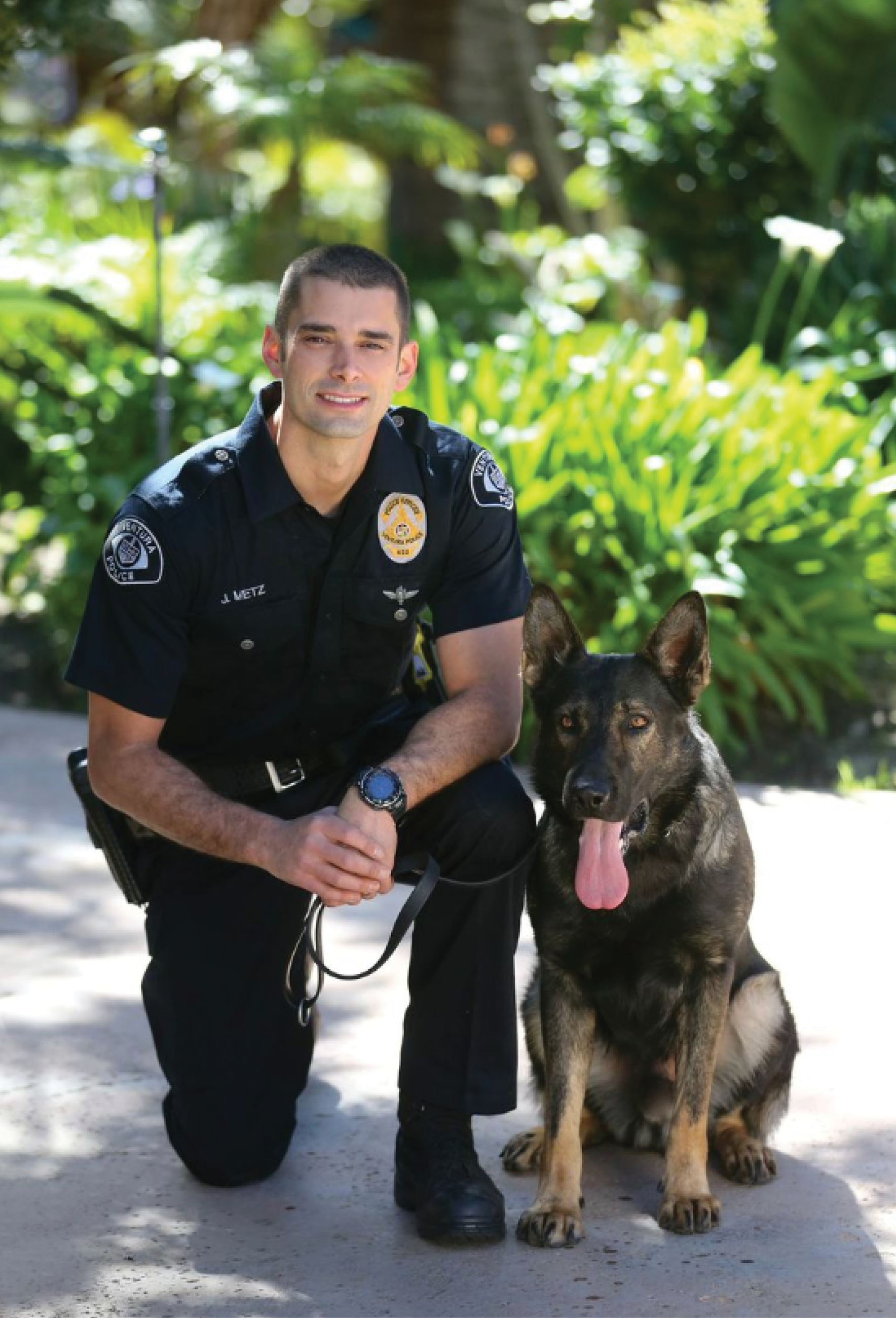 In April of 2014, Officer Joe Metz and Yankee Vom Haus Vortkamp, aka Yankee, became partners and started their training together. In 2014 they were sent to a rigorous 5-week police dog patrol school through the Inglis Police Dog Academy. Yankee was trained in apprehension, urban tracking and narcotics detection through the Inglis Police Dog Academy.

K9 Yankee was born in Germany on November 18, 2012. He was purchased with the help of the National Police Dog Foundation and flown to Ventura where he was partnered with Officer Metz. 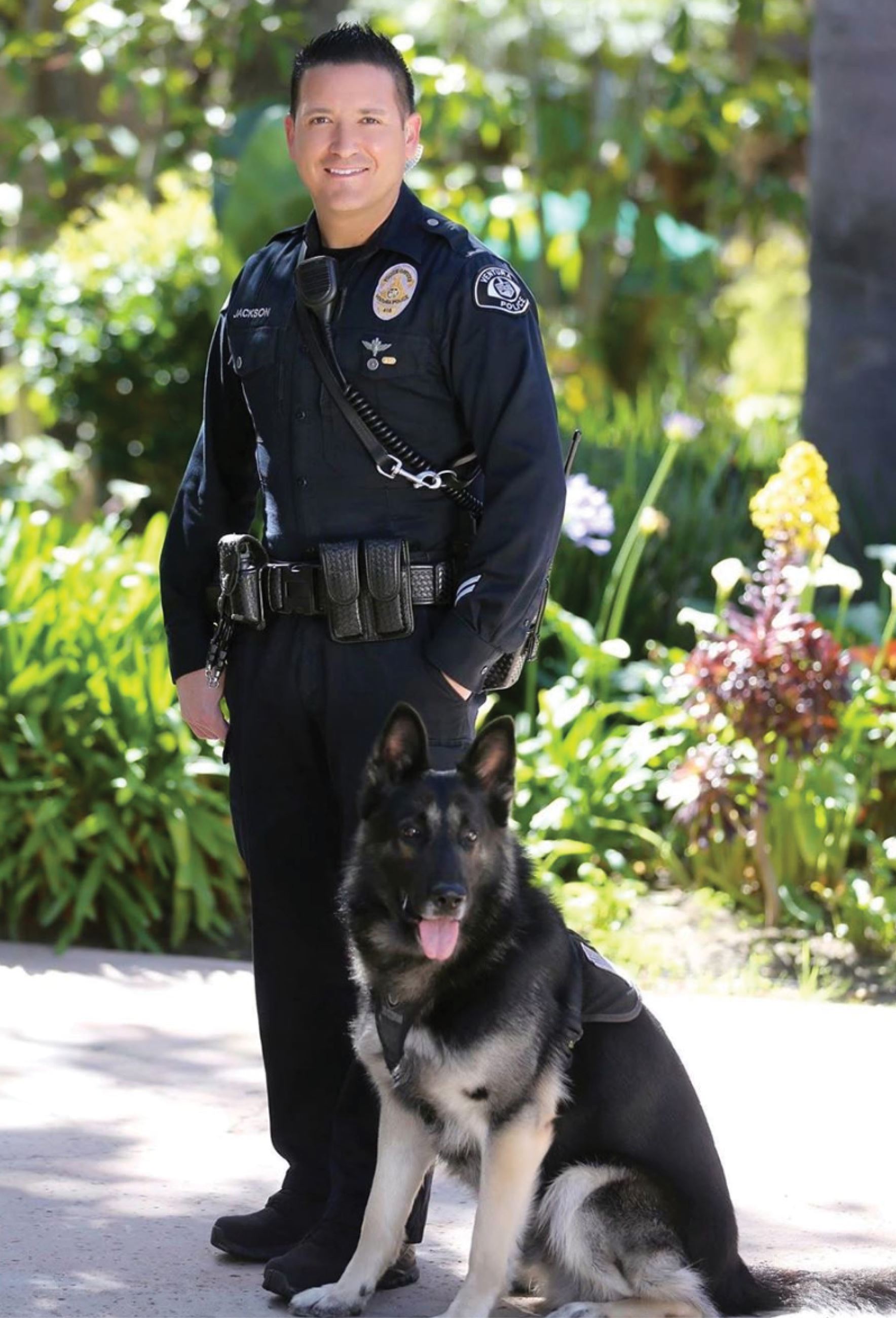 Eric and Eron joined the Unit in Sept. 2011 after Eron was flown in from Serbia at 16 months old. K9 Eron has 24 total apprehensions on carjackers, attempted murders, and burglars. He was also a very productive narcotics detection K9 and a regular friend at the West Park PAL Boxing Club where he had the chance to hangout with local students.

Eric has been with VPD 13 years and was a Deputy for 18 years prior and was with Eron for 5 years before promoting out of the Unit. 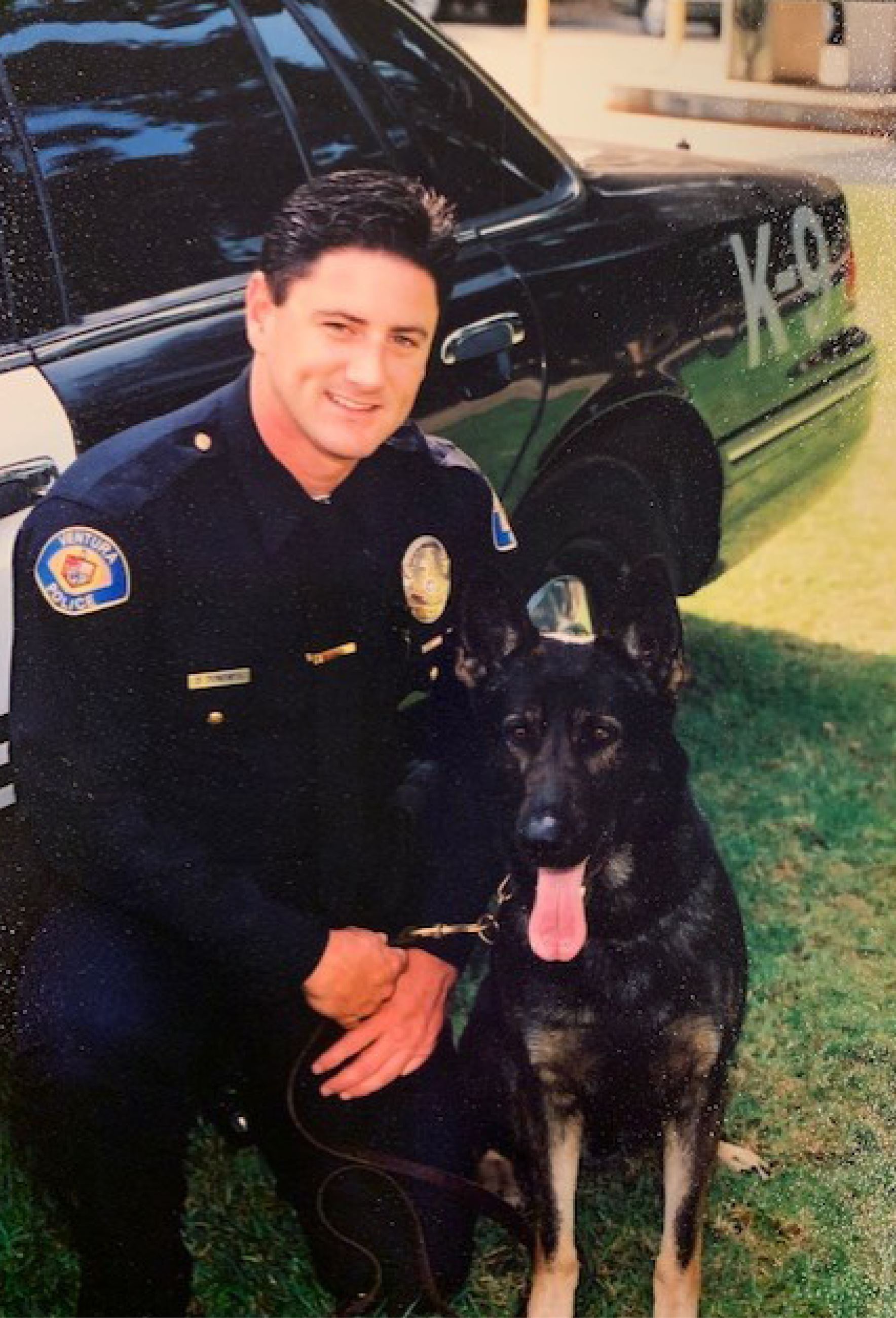 Derek joined the Unit in 2001 and Bad Z Praskateckeho Statku, aka Bud joined from the Czech Republic shortly after, when he was about 16 months old. Derek and Bud competed in many K9 competitions, earning 1st place in Protection.

Derek has been with VPD for 22 years, and has been a Police Officer for 25. He is currently assigned to our Patrol Task Force. 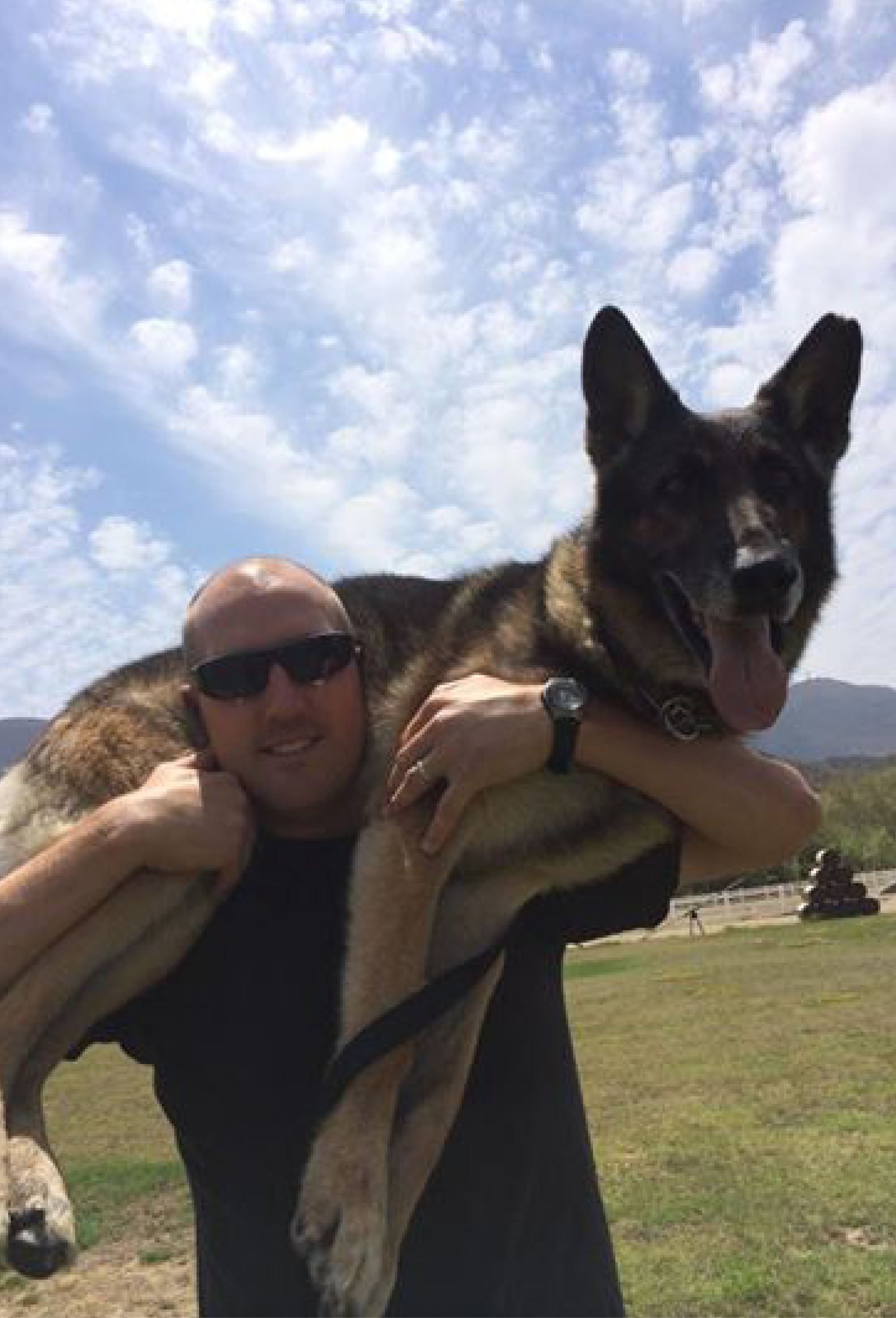 Michael and Ferro joined the K9 Unit in together 2009 and were partnered together for 5.5 years. K9 Ferro was trained in Protection, Narcotics Detection, and Tracking.

K9 Ferro retired in 2014 at the age of 8 due to developing cancer. He passed away three months later. Ferro was a great dog, a great partner, a great friend, and a valuable family member, he is missed greatly. 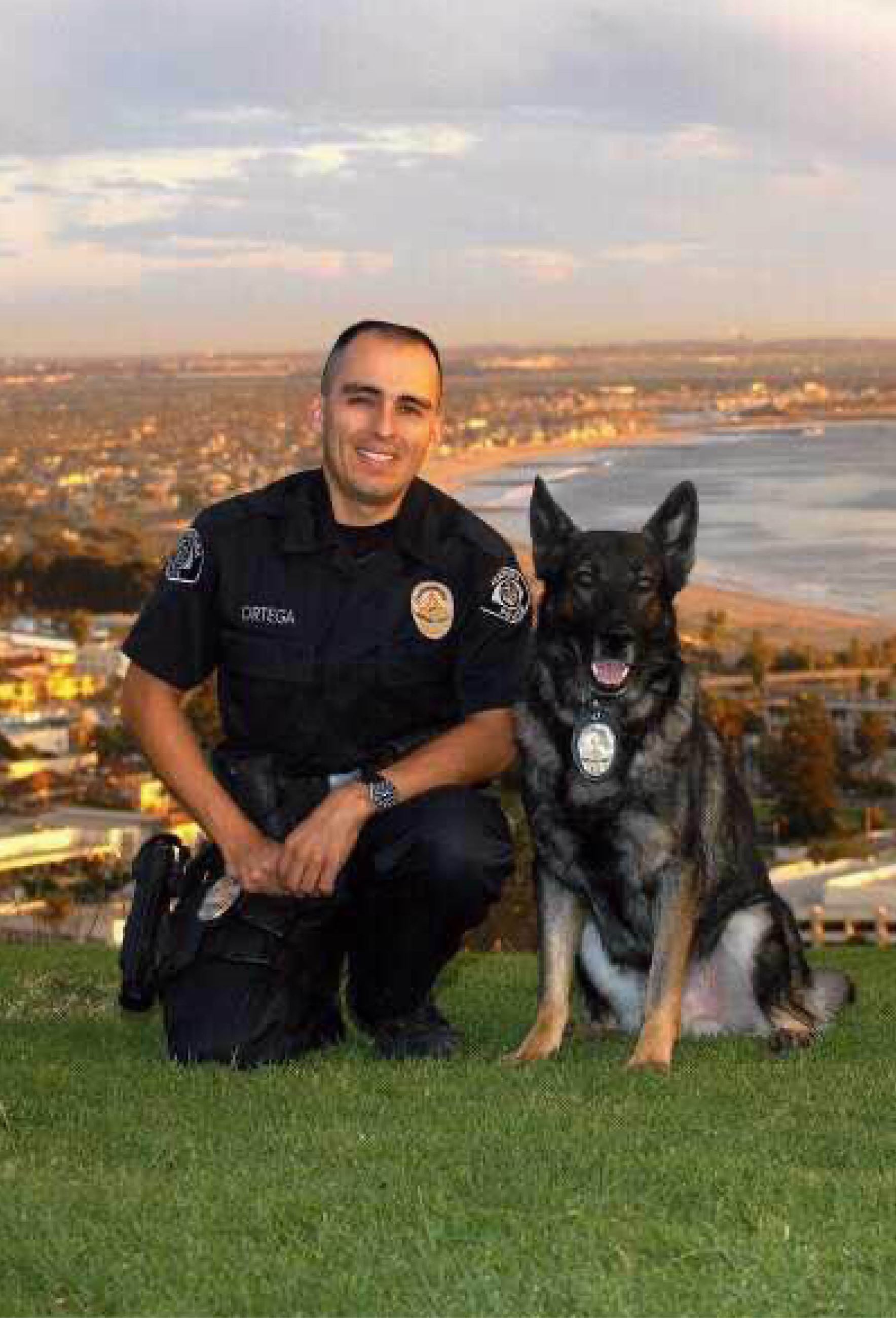 Felix Von Vort Kamp and Artus were dual purpose Patrol and Narcotics Detection K9. He won many wards at various trials throughout his career. 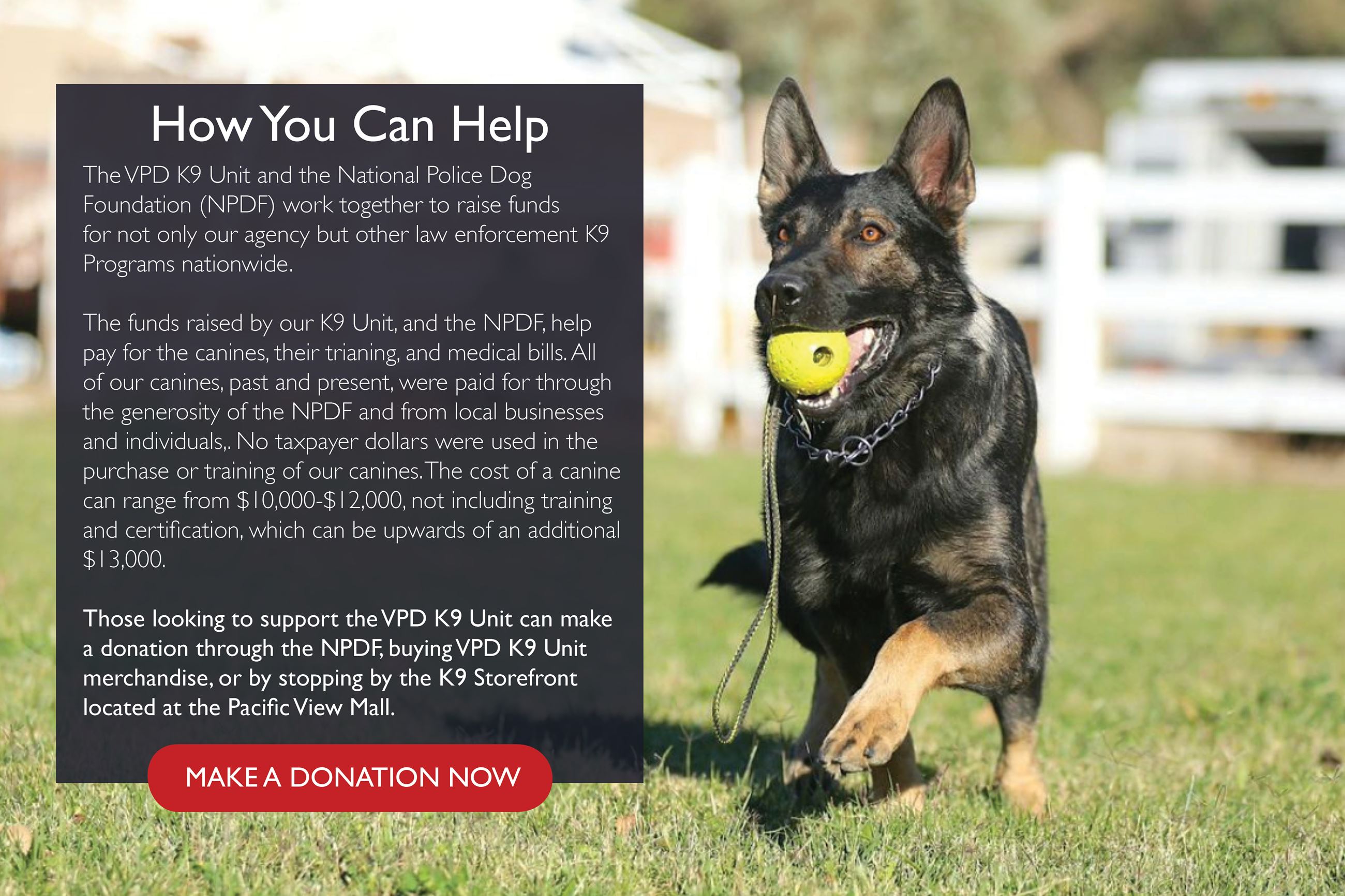